Animal charity The Humane League UK is marking the 200 year anniversary of the UK’s first animal welfare law by asking the Government to ban cages for egg-laying hens with a demo outside Parliament today. 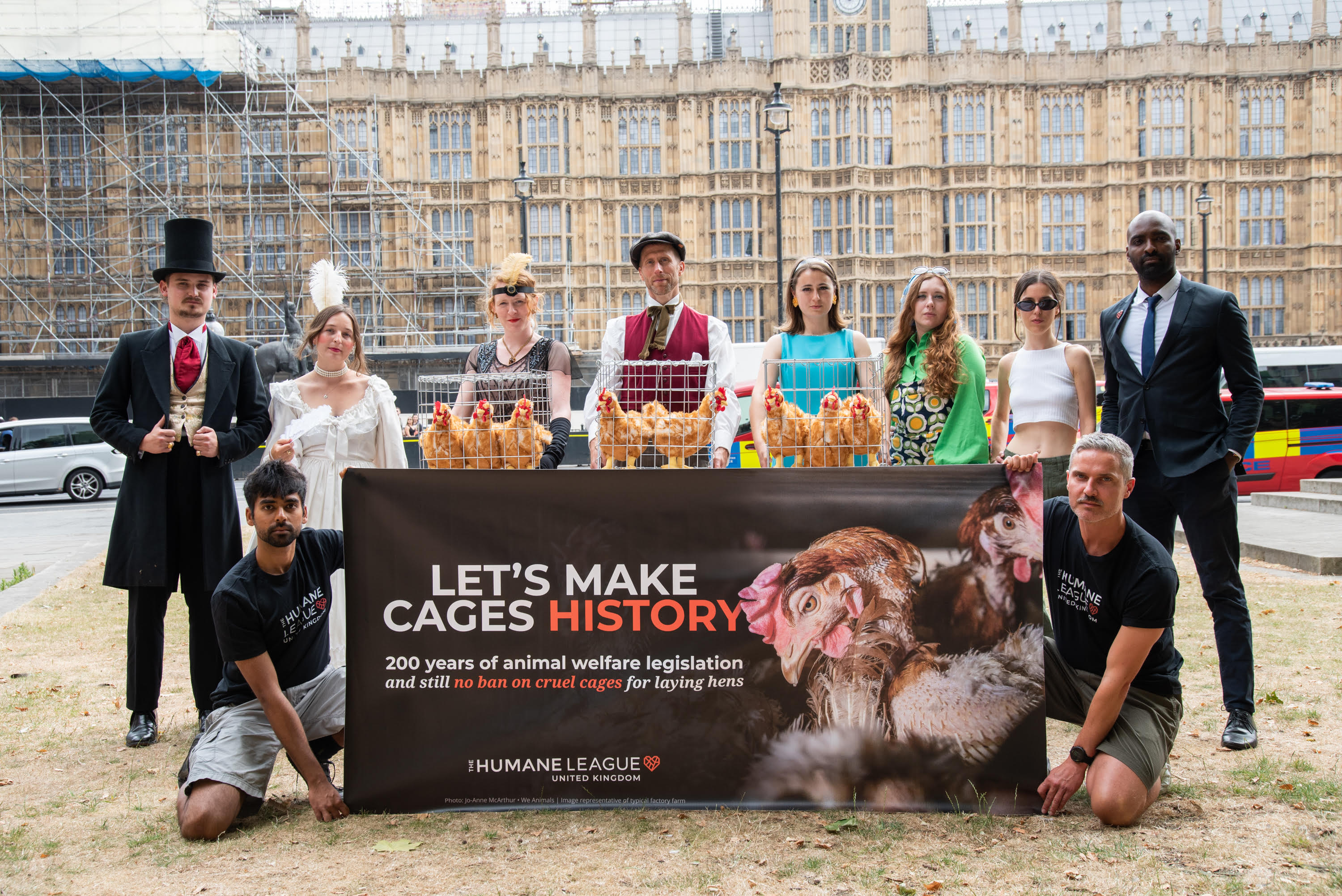 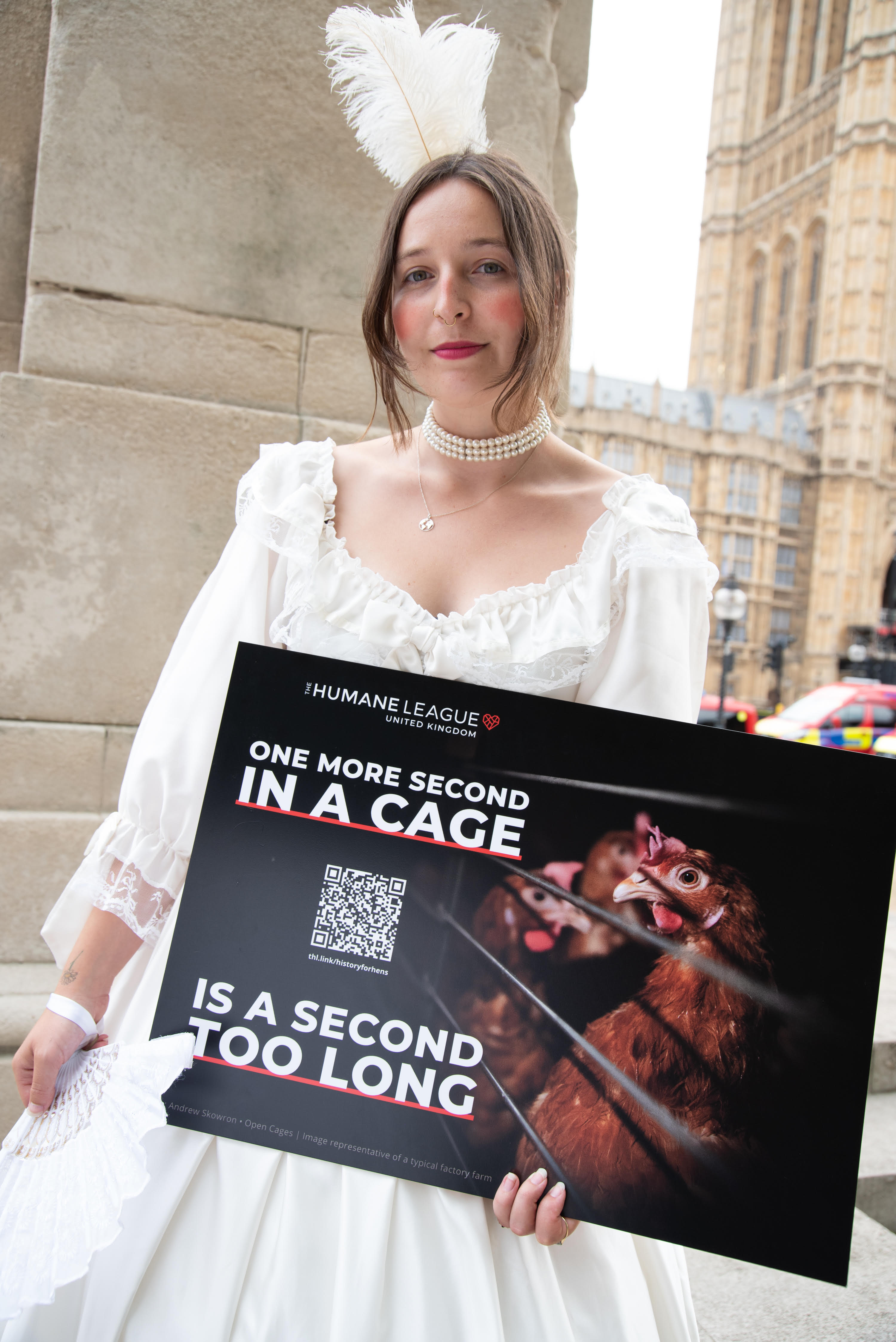 According to a survey of 2,000 Brits by Atomik Research, one third of people believe that egg-laying hens have better lives now than they did 200 years ago, despite factory and cage farming not being invented in 1822.

The survey also found that of those who eat eggs, 72% say that buying free-range is important to them.

Singer Sinitta, who endorsed the campaign, said: “It completely boggles my mind that hens suffer more today than hundreds of years ago. We’ve invented planes, cars, antibiotics, telephones, and the internet but when it comes to our treatment of innocent farmed animals things have arguably gotten worse. This is unacceptable – we must ban cages for hens.”

​​Dr Marc Abraham OBE, media vet and author, says: “There’s going to be a change of government soon and, although disruptive, this can present a major opportunity for change. They need to realise that a significantly high proportion of British people want cruel and exploitative cages banned outright, as they should. It’s not fair keeping energetic, intelligent, and curious animals like hens in steel wire boxes, where they suffer unnaturally shortened and miserable lives. If those in power refuse to act on their own pro-animal welfare mandate, the nation’s animal-lovers will just keep campaigning until the health and wellbeing of animals is finally and fully respected.” 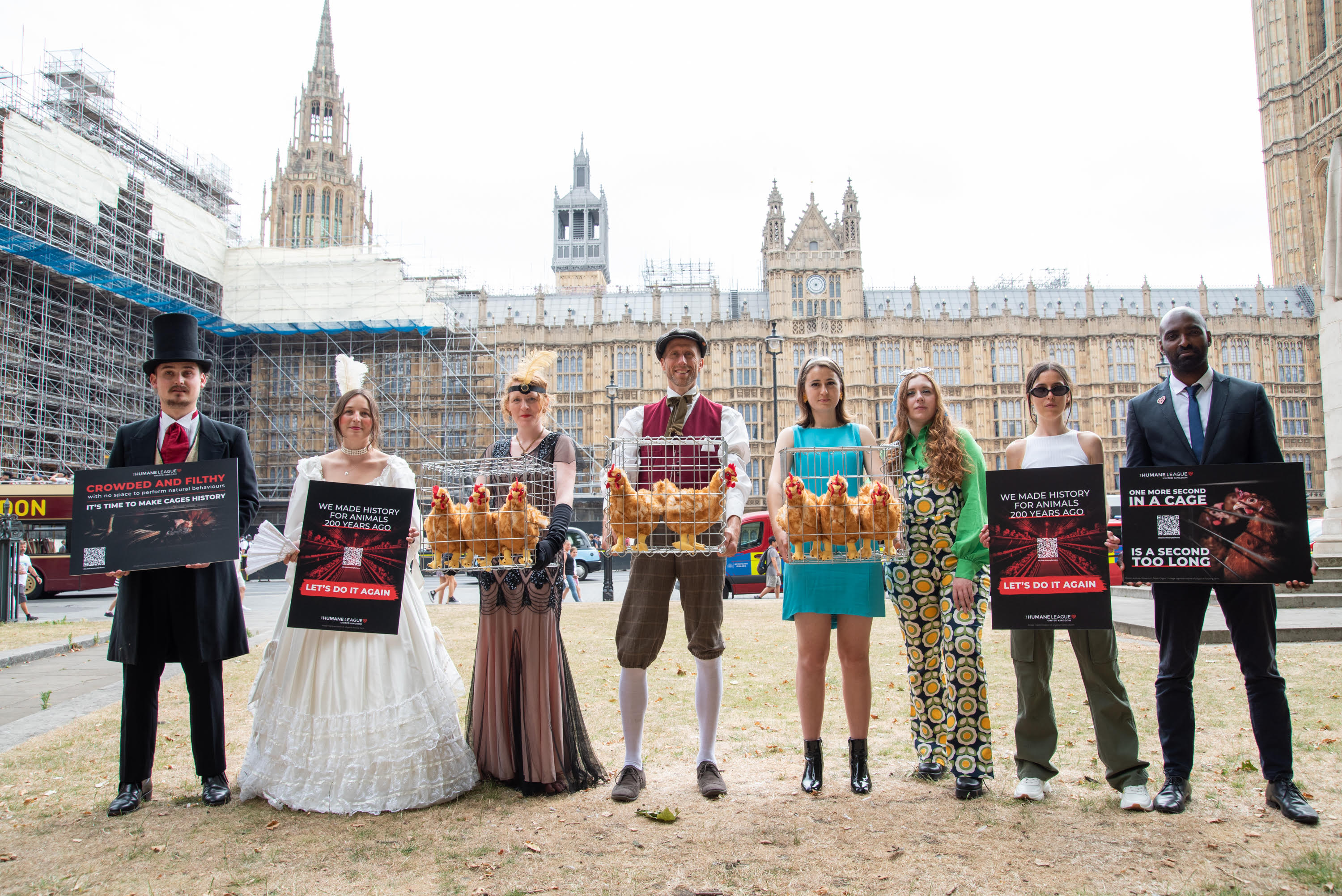 On July 22nd 1822 Parliament passed The Cruel Treatment of Cattle Act which protected cows, horses, mules and sheep from beatings and abuse.

It was the first piece of animal welfare legislation in the world, and was masterminded by Irish MP and colonel Richard ‘Humanity Dick’ Martin, who defended animals so vigorously he fought at least one duel over cruelty to a dog.

Battery cages began to find wide use in farming from the 1940s onwards and, although barren battery cages were banned in the UK in 2012, millions of hens remain trapped in marginally larger ‘enriched’ cages.

Around 14 million hens, or 35% of the UK’s flock, are still kept in these cages which frustrate natural behaviours like wing-stretching, foraging and dust-bathing. 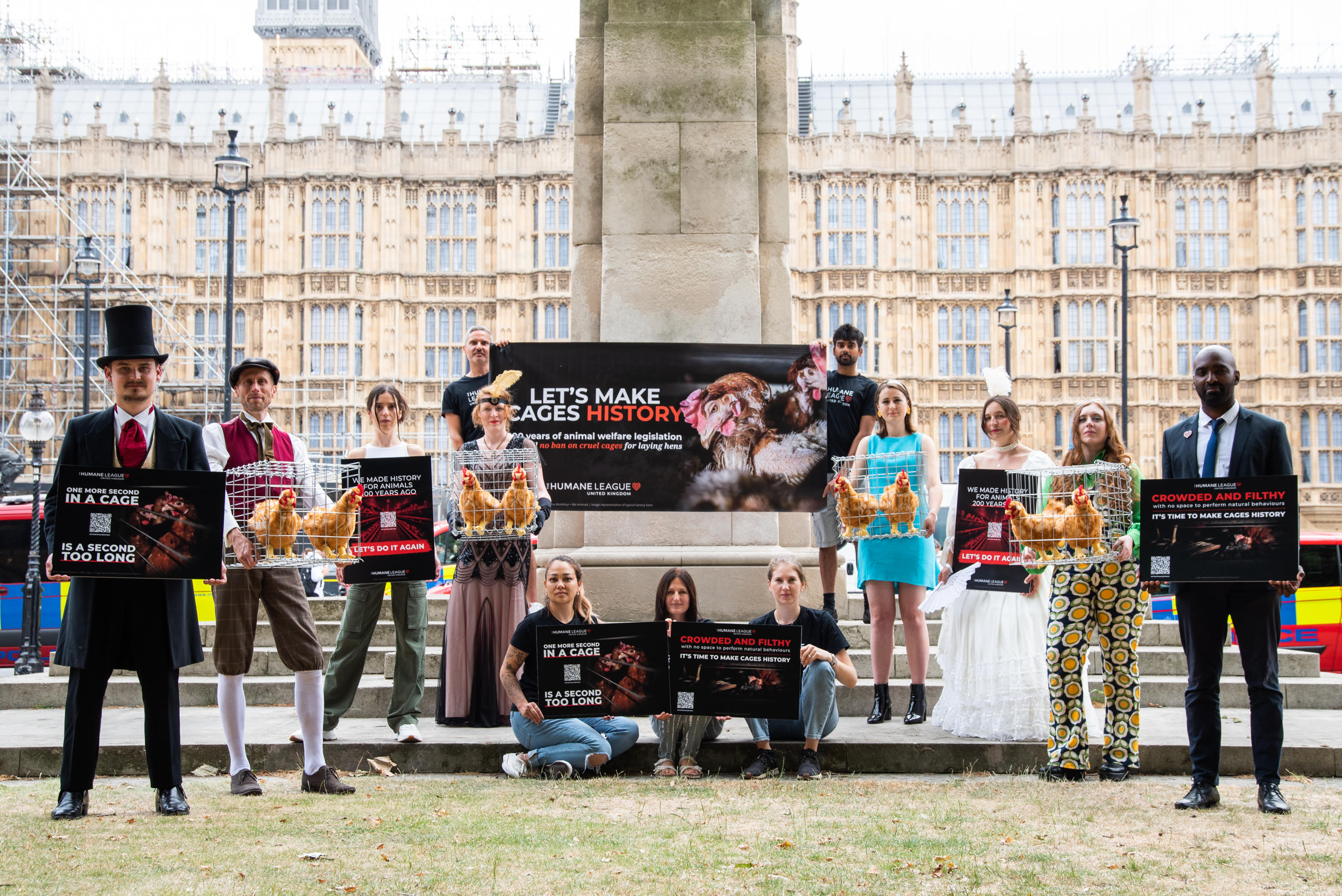 This is despite strong public opposition to such practices.

The government confirmed last month in the End the Cage Age debate that there would be a consultation on the use of cages for laying hens and farrowing crates for pigs.

Without a ban, members of the public can never be sure that they aren’t purchasing eggs from cruelly caged hens, as even with 80-90% of the egg industry committed to going cage-free by 2025 that will leave 4.2 to 8.4 million birds in cages supplying small single location businesses and restaurants. 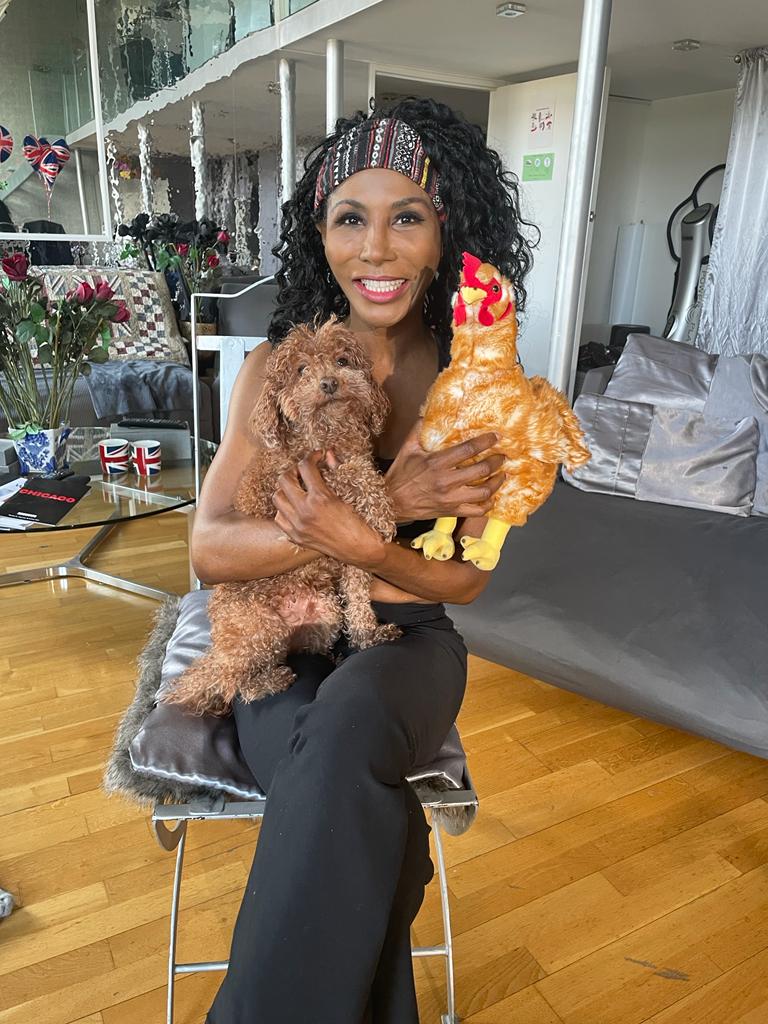 These protests form part of Beatrice’s Campaign, which seeks to ban cages for hens and is led by UK charities The Humane League UK, RSPCA, and Conservative Animal Welfare Foundation.

The campaign is named after Beatrice, a hen who was rescued from a cage and now thrives with her adoptive family in Wiltshire, having regrown all the feathers she’d lost during her previous, stress-filled life.