Celsys officially opens the International Comic/Manga School Contest 2023 for students worldwide, accepting comics and illustrations on the theme of Light and Darkness. This contest gives future professional comic artists a chance to learn new techniques and to make contact with the comic industry early in their careers. School registration begins on November 1, with entries from students to be accepted from December 1.

Prizes include cash prizes of up to $3,300, Wacom drawing tablets, and licenses for the Clip Studio Paint comic and illustration drawing app, as well as chances to have winning entries published by sponsors. Comic industry companies worldwide sponsor the contest, including SHUEISHA, KADOKAWA, BookLive, Ki-oon, pixiv, and Wacom, with operational support from NGOs such as The Japan Cartoonists Association, Manga Japan, and the Digital Manga Association. 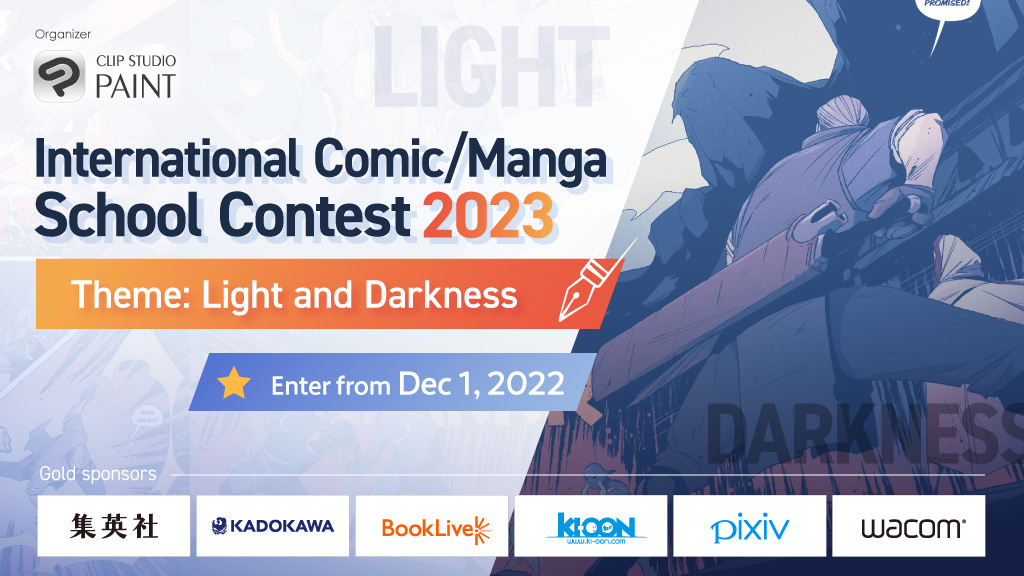 The judging panel for this year’s contest will be led by professional creators and representatives from sponsors. Winning entries receive detailed critique, which gives the winners and other participating students a springboard to improve their skills. Previous contestants said, “I appreciated a lot of the constructive criticism that the judges offered so that next time I try making a comic again, I can keep these thoughts in mind” and “The comments picked up on parts that I missed and will really help me in my future creative activities! It was nice how there was careful feedback for each page.”

Starting in 2018 as a contest for European artists, the International Comic/Manga School Contest is now in its sixth year. Last year, the contest garnered over 1,600 compelling entries from 1,317 participating schools in 90 countries and regions. The winning entries are translated into English, French, Spanish, German, Japanese, Traditional Chinese, and Korean for readers all over the world to enjoy.

Through these events, Celsys, together with leading figures in comic culture both in Japan and across the globe, continues to support young creators aspiring to become professional artists.

Celsys, with a mission of “Creating a more passionate world,” provides solutions for creative activities through the “Clip Studio Paint” app for illustration, manga, webtoon, and animation production, the “Clip Studio” web service, and the “Clip Studio Reader” e-book solution. Celsys supports people all over the world to better enjoy creating and all the experiences that come with it.