Digital Payments Are Now Even Faster and More Secure With Fibank, Fitbit and Visa

At a time when digital technologies are increasingly taking over payment transactions, consumers tend to prefer secure and contactless methods. Another innovative project in this direction resulted from the partnership between Fibank (First Investment Bank), Fitbit and Visa, allowing payments by just waving your watch over the terminal.

Fitbit Pay will allow customers to add their Fibank issued Visa cards to their compatible Fitbit wearable devices. Customers will be able to make payments at points of sale (POS) locations that support contactless payment technology without the need to take their card out. 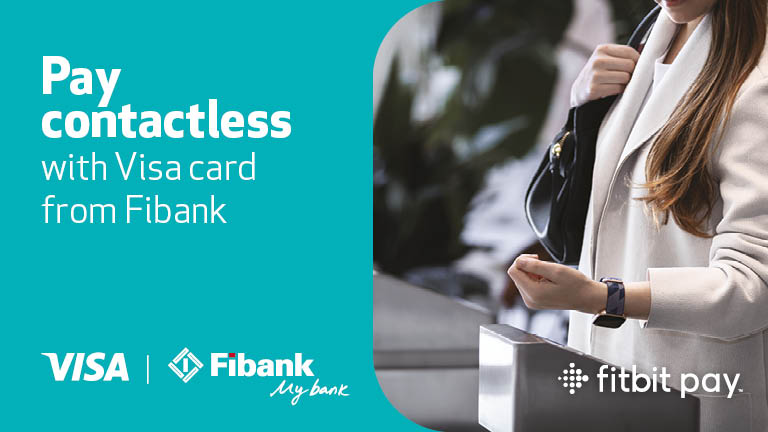 Fitbit Pay is currently available on Fitbit Sense, Fitbit Versa family of smartwatches, Fitbit Ionic, Fitbit Charge 4 and Fitbit Charge 3 Special Edition. By following simple steps in the Fitbit app on Android or iOS, users can quickly add their Fibank cards to their Fitbit Wallet. To make payments, consumers simply need to press and hold the left side button until their Fibank card is seen on their device screen, then hold the device near a payment terminal until a confirmation of payment appears. A protected PIN is chosen by the user during device set-up for an additional level of security.

Furthermore, the usage of Visa’s tokenisation technology makes every e- and m-commerce payments secure and simple, by replacing consumer accounts with a unique digital identifier or “token” used specifically for each device. Hence, account and card data are never shared, which brings an additional layer of security to digital payments.

In connection with the launch of service, Mr. Nikola Bakalov, CEO and Chair of the Management Board of Fibank, commented: “Fibank is pleased to be the first Bulgarian bank to offer Fitbit Pay to its customers. Over the years, we have consistently set innovation in every area of ​​banking as our priority. We offered the first contactless cards and introduced mobile payments using smartphones and watches, previously unknown to the local market. Given the situation that 2020 has put us in, we will continue to work for the convenience and security of our customers, and will soon surprise them with even more new services.”

“At Visa, we are committed to provide payment experiences tailored for consumers’ needs. Since the very beginning of the pandemic, contactless payments became a hygiene factor for consumers who expected to eliminate the usage of cash and contact with payment terminals. We are pleased to partner with Fibank to untap the potential in wearables and create payment experiences that change the way consumers make their day-to-day payments, particularly at places that are traditionally reliant on cash. Thanks to Fibank and the security of Visa’s tokenization technology, people can pay with their Fitbit the same way they do with their credit or debit card and enjoying even more convenience”, said Krassimira Raycheva, Country Manager of Visa for Bulgaria.

For understudies searching for Amazon web services instructional courses in the city of Gurugram, underneath are the rundown of the top places
Read more
Business

ANIL UZUN is a serial entrepreneur who has been active in the Fintech sector for many years. He will be talking about his vision for continued success and how to aim for it.
Read more
Photography

Focus for Survival is a free-to-enter photographic competition, open to all, organised by UK-based conservation charity Explorers Against Extinction
Read more
Travel

Having settled in England in the 1750s, Italian dentist Ruspini joined the freemasons in channeling Enlightenment values through his profession and philanthropy.
Read more